The 1948 Arab-Israeli war (known as the War of Independence in Israel) was the first major conflict between Israel and the Arab states. The British, under mounting international pressure, withdrew from Palestine. The UN passed Resolution 181, which called for the partition of an Arab and Jewish state in Palestine. Egypt, Lebanon, Jordan, Syria, and Iraq (comprising the Arab League) invaded Israel after its declaration of statehood.

The invaders were repelled in 1949, but even with the armistice agreement between Israel and the Arab League, the war had several important consequences. The 1948 war is considered to be a major cause of the Jewish exodus from Muslim countries, and half of the Palestinian exodus occurred throughout the duration of the war when thousands of Palestinians fled their homes or were expelled. The 1948 war set the tone for the geopolitical climate of modern Israel and Palestine. 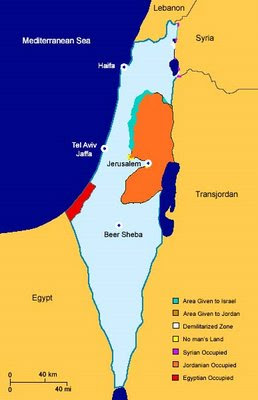 Sinai Campaign:
Israel felt increasingly threatened by an Egyptian blockade of Israeli ports and (ostensibly) Egyptian-sponsored guerrilla activity. In 1956, in conjunction with France and England, Israel successfully captured the Suez Canal, while French and English troops moved in to separate Egyptian and Israeli forces as “peacekeepers”. The US and Soviet Union strongly opposed this occupation, and demanded the withdrawal of Israeli troops. Israel complied, but Israel sent a strong message to its hostile neighbors; that it would attack offensively to secure its defense.